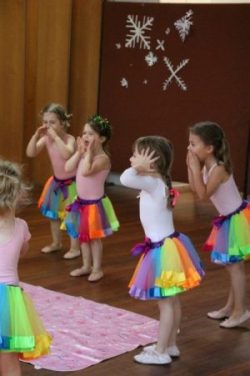 “My daughter Eva attended Miss Sophia’s dance classes when she was 3. It was an amazingly nurturing environment and I can not speak highly enough of Miss Sophia herself. Eva had the best time and the classes helped with her coordination. I cannot recommend these classes highly enough! “

“My son and daughter started at DanceTots at aged 2 and 3 and attended for over 2 years. They both absolutely loved dancing with Miss Sophia and it was the highlight of their week. The lessons were all about having fun, being creative, meeting new friends and learning about dancing and movement. My son and daughter (and I) highly recommend the Dance Tot lessons”

“We couldn’t have found a better first dance class for my daughter! Sophia is such a fantastic teacher – my daughter has some coordination problems and would often avoid dancing for that very reason, but with Sophia’s encouragment she quickly developed confidence and found the fun in dancing. Seeing her pride in herself in the final concert is something I’ll never forget”